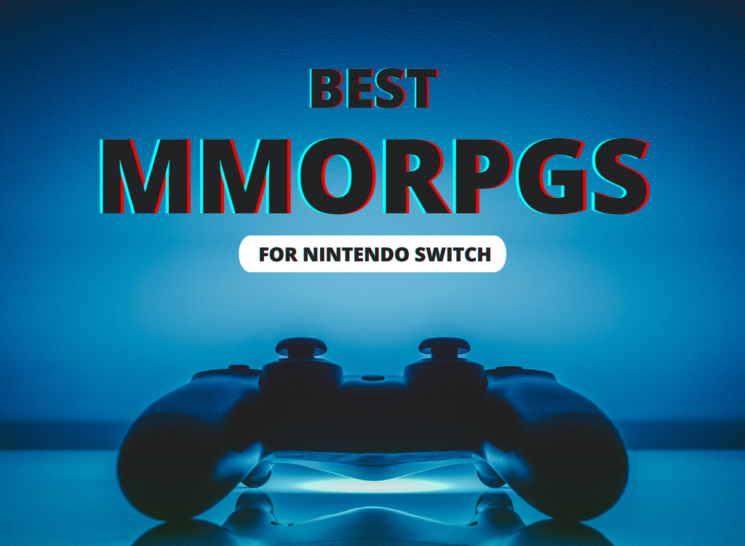 The Nintendo Switch is home to a growing library of MMORPGs or Massively Multiplayer Online Role-Playing Games. While the Switch may not have the same graphical capabilities as high-end gaming PCs or consoles, many developers choose to port their games over to Nintendo’s newest console anyway. This is likely because the unique features of the Switch – such as its ability to be played on the go – make it an attractive platform for MMORPGs.

The Nintendo Switch offers a unique opportunity for MMORPGs. The console’s portability and detachable controllers make it possible to play multiplayer games with others in the same room or on the go. If you’re looking for the best ones to play on your Switch, look no further! Here are the best MMORPGs for Nintendo Switch:

DC Universe Online (DCUO) is a free-to-play massively multiplayer online game set in the DC Comics universe. Developed by Daybreak Game Company and co-published by Warner Bros. Interactive Entertainment and DC Entertainment. The game was released for the PlayStation 3 and Microsoft Windows in January 2011. A Mac version was released in August 2011.

DC Universe Online is set in the fictional world of DC Comics and features a storyline where players can create their superheroes or villains and interact with characters from the DC Comics universe. The game is set in a three-dimensional environment and allows players to interact with other players worldwide.

The game received mixed reviews upon release. However, the developers have continued to support the game with new content and features. In March 2016, it was announced that the game would be coming to the Xbox One and PlayStation 4.

The gameplay of DCUO is similar to that of other MMORPGs, with players creating a character, exploring the game world, and completing quests. The game features two types of currency: in-game money and experience points. The player can use the money to purchase in-game items.

Players control their characters in an interactive world that includes famous locations like Gotham City and Metropolis. Players can fight alongside or against their favorite DC Super Heroes and Villains, including Batman, Wonder Woman, The Joker, and Lex Luthor.

Dauntless is an action RPG for PC that’s free-to-play. It’sIt’s set in a world of floating islands, and you play as a Slayer, fighting against Behemoths to protect the world. To do this, players must gather materials from the surrounding world to craft weapons and armor to take down the creatures—over a dozen different weapons to choose from, each with unique combos and strategies.

This game is one of the newer MMORPGs on the market, and it’s quickly gaining a following. The developers constantly release new content and update the more interactive versions. It is set in a world constantly being reshaped by the Behemoths. Players can choose to team up with others or go it alone and are able to join one of four factions: the Rams, the Ostriches, the Phoenixes, or the Bears.

Dauntless is an online action role-playing game developed by Phoenix Labs. The game was released for Microsoft Windows, PlayStation 4, and Xbox One in May 2018. Dauntless received mixed reviews from critics, who praised its core mechanics but criticized its lack of content. The game is set in an open world, and players can explore the various islands at their leisure. Combat is fast-paced and exciting, and players can use various weapons and abilities to take down their foes. There are also cooperative multiplayer modes for up to four players.

Warframe is a free-to-play cooperative online action game set in an evolving sci-fi world. Warframe players are called Tenno, and they’re given access to advanced weaponry, armor, and abilities to help them fight the oppressive Grineer Empire. In Warframe, players team up with friends to complete missions, raid enemies, and craft powerful new weapons.

The game has been downloaded by over 38 million people on PC, PlayStation 4, and Xbox One. Warframe was also the most played game on Steam in 2018. It has been called one of the best games of all time and continues to be one of the most popular games on the planet. Warframe is an MMORPG shooter that has players take on the role of Tenno, ancient warriors who have awoken from centuries of cryosleep to find themselves at war.

The game is set in a large open world, with players exploring different planets and completing quests. The game’s main objective is to gather resources and build weapons and armor.

Temtem is an upcoming massively multiplayer online role-playing game (MMORPG) for the PC and Nintendo Switch. It is the first game that allows players to capture, battle, and trade Temtem creatures with one another online.

The game is set in the world of air-borne islands known as the Archipelago of Temtem. Players will start their adventure from the lowest island and work their way up, uncovering new Temtem and uncovering the mysteries of the world along the way.

Temtem is an MMORPG that takes place in the world of Airia. The game is set in a world where the player must collect and train Temtem to battle other tamers in the region. The game’s ultimate goal is to become the most potent tamer on Airia.

It is heavily inspired by the Pokémon games and features a similar battle system. However, Temtem also introduces new features such as cooperative multiplayer and a crafting system.

Dragon Quest X is a massive multiplayer online role-playing game (MMORPG) for the Wii, Nintendo 3DS, and Microsoft Windows platforms, developed by Square Enix and Armor Project. It is the tenth installment in the Dragon Quest series and the first to be released on multiple platforms. The game was announced in December 2010 as Dragon Quest X: Mezameshi Itsutsu no Shuzoku Online and was initially released for the Wii in Japan on August 2, 2012.

On March 30, 2013, Square Enix announced that they were developing a port of the game for the Nintendo 3DS, released in Japan on August 8, 2013. The game follows the adventures of a player character and their friends who join together to save the world of Astoltia from destruction. The player can choose from five playable races: human, elf, half-elf, dwarf, or half-dwarf.

CrossCode is an upcoming free-to-play action RPG for PC and Mac set in the distant future. It features a unique “time-travel” system that allows players to swap between two different versions of the game’s world, allowing for various playstyles. The game is heavily inspired by classic 16-bit action RPGs, such as Secret of Mana, Chrono Trigger, and Zelda: A Link to the Past.

CrossCode is an action-packed MMORPG set in the distant future, where the world is on the brink of destruction. It features a unique mix of 2D pixel graphics and 3D environments and an intense combat system that rewards skill and timing.

The version of Crosscode for Windows, Mac, and Linux was released in September 2018 and for Nintendo Switch in July 2020. Leudin Games developed a two-person team consisting of David Münnich and Manuel Schenk.

Remnants is a Massively Multiplayer Online Role-Playing Game (MMORPG) in which players explore the open world, interact with others, and complete quests. The game is set in the future after a natural disaster has destroyed the world. Players must work together to rebuild society while completing quests and defeating enemies along the way.

This game has many features which are not found in other online games. Players can perform various actions such as forging and enchanting weapons and armor, fishing, cooking, and more. There are also different races, such as elves and dwarves, which players can choose from to create their character.

Remnants differ from other MMORPGs in that it offers a unique experience for each player. While most MMORPGs are based on a leveling system, Remnants allows players to choose their path, which means no two players will have the same experience.

Skyforge is a massively multiplayer online role-playing game (MMORPG) for the PlayStation 4, Nintendo, and PC, first released in 2015. Developed by Allods Team and Obsidian Entertainment, Skyforge is set in a sci-fi world where players take on the role of an immortal hero who has sworn to protect their world from invading gods.

Players start their journey by choosing one of the 10 classes, each unique ability, and playstyle. Over the course of their adventure, players will progress through the game’s content and unlock new skills, equipment, and allies to aid them in their fight against the divine.

Onigiri is a free-to-play massively multiplayer online role-playing game developed by Cyberstep and published in Japan by Bandai Namco Entertainment in February 2017. The game is based on the mythology of Shinto. Players assume the role of one of the seven Kamikui, deities born from the prayers of mortals, and set out to stop the spread of the Aragami, monsters born from the nightmares of men.

The game was announced in February 2016 as a collaboration between Cyberstep and Bandai Namco Entertainment. Onigiri is a type of role-playing game that borrows from the Japanese rice ball dish of the same name. In Onigiri, players take on the role of a character and adventure through a fantastic world, interacting with other players and completing quests. The game is free-to-play and can be accessed through web browsers or mobile devices.

Onigiri differs from other MMORPGs in that it has a strong focus on cooperative play. Players can team up to take on dungeons and bosses or simply chat and socialize with others.

Nintendo Switch gamers, if you’re looking for a new game to sink your teeth into, then look no further, try this list of best MMORPGs for Nintendo Switch. If you’re interested in learning more about any of these games, please don’t hesitate to contact us. We would be happy to provide you with a more in-depth look at any of these titles.

What is the most liked game on Nintendo Switch?

The Nintendo Switch is a popular video game console released in 2017. The console offers a variety of games for users to play, including both first-party and third-party games. The most popular game on the Nintendo Switch is Super Smash Bros. Ultimate, which was released in December 2018. The game has sold over 12 million copies, and it is the fastest-selling game in Nintendo history.

What’s the difference between MMO and RPG games?

Which is better, MMORPG or RPG?

There is no clear answer, as both MMORPGs and RPGs have advantages and disadvantages. Some people might prefer the social interaction that comes with MMORPGs, while others might appreciate the freedom to choose and explore worlds that RPGs offer.

MMORPGs, or massively multiplayer online role-playing games, allow players to interact with each other in a virtual world. RPGs are typically single-player experiences where the player takes on the role of a character and completes quests alone or in a team.

Is Genshin impact an MMORPG?

Genshin Impact is an upcoming action role-playing game for mobile devices. The game has been marketed as an MMORPG, but there is some contention over whether it actually meets that definition. Genshin Impact does not appear to have a system in place for players to interact with one another. There is no chat feature, and the only way to communicate with other players is by leaving them messages on a message board.